​“The word genius is often over used but what else could the man whose show stopping performance at Abertillary Blues Festival on his ’57 custom three pick-upped black beauty Les Paul be coined”, “Flights and notations of mystery and imagination crashed to Earth like space shrapnel” and a more to the point quote “Why isn’t this man a star?”. Just a few of the many positive media quotations Melvin Hancox has experienced of late.

Born to song writer and playwright Stephen and artist Lynette of late Melvin has had material played on Rick Wakeman’s Planet Rock Show, Zoe Green's Blues and Beyond and most recently on Cerys Matthews BBC Radio 2  Blues Show along with writing and television work.

He has currently formed a band in his own image after many years of bringing his talent to others outfits. Playing his first gigs at 12 yrs., getting his first record deal at 16 yrs. and touring Europe and gaining experience in both radio and television, forming “Vincent Flatts Final Drive” and scoring his second deal at 18 yrs. whilst also touring Costa Rica and The States and guesting on others sessions along the way, through various permutations he has worked with Ray Phillips: Budgie, Man, Tony McPhee, Tom Farnell: Savoy Brown, Canned Heat, Paul Hancox [no relation] ex-legendary Chicken Shack drummer with whom Melvin occasionally performs as “Imagination Lady”, Kex Gorin: Magnum Mick Bonham [yes related] and Ace Kefford,  whilst going on to write, produce and release six highly original albums fronting his own trio as well a solo offerings.
Now with the addition of Matt Little on Bass Guitar (son of Curtis and brother of X-Factor drummer Jamie) Matt’s pedigree includes stints with The Mothers of Prevention, original Joanne Shaw Taylor bassist and like his brother a much in demand and “on the scene” session man. On Percussion Tony Baylis is “The Man” whose C.V. reads as a history of Rock & Roll beginning with Pye Records in the 70’s joining ex-Move, Steve Gibbons Band legend Trevor Burton and recording the now much sought after Double Zero album thereafter touring Costa Rica and the States with Melvin and touring once again with Ruf Records artist Ian Parker, Tony is back with Melvin who is now accompanied by a sympathetic and adaptable rhythm section with several years’ pedigree. Melvin has just signed a new management deal and completed his fifth season as presenter and writer of the Radio B.O.S.S. Show that’s “The Big Oversoul Sounds” for American college radio and was recently described by one writer as a talented and witty individual reminiscent of Kenny Everett. We could go on for pages but we’re sure you more than get the picture. Needless to say if you like your blues/rock played with more psychedelic experience and imagination than most “The Melvin Hancox Band” is a show that really should not be missed!!, why even Chrissie Hynde says she digs the band!!! Ya dig?
Photographs courtesy of Mick Schofield
You're welcome to visit our commune 53 Psychedelic Road, Birmingham U.K anytime... 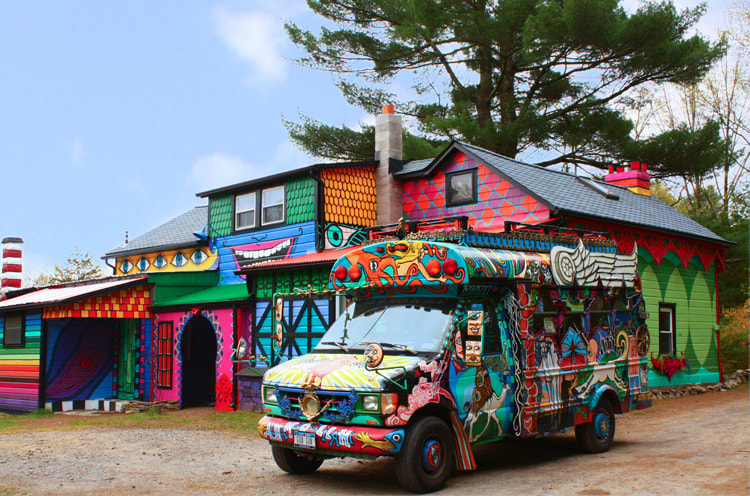